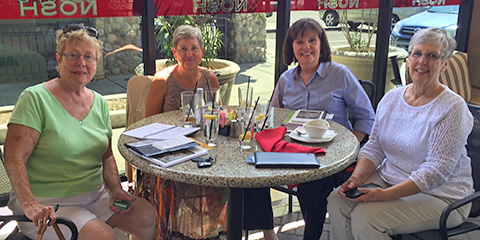 Christine Wynd, PhD, RN, president, MCCN, is eager to meet you, hear about your Mount Carmel experiences and share her vision for the future of the College. If you would like to host a get-together in your area, please contact Debbie at dboggs@mccn.edu or by phone at 614.234.5681. She can assist with locating other alumni in your area and with planning the event. Some alumni may be in groups that gather regularly, and we would love to have the opportunity to join you! Here are a few “Road Trips” that took place recently:

This past spring (left to right) Ruth Strickler '52, Gail Kramer Ellis, '76, Fran Ballant Bauman, '76, and Pat Brown Gates, '63, met at Betty's Nosh in Glendale, Arizona, for a pleasant luncheon. Gail and Fran knew each other in high school and were aware that they were both going to nursing school. It turned out that they became classmates (and roomies) at Mount Carmel. Ruth has attended every luncheon since the group began meeting in 2010. With three graduate years represented, the afternoon was spent sharing memories and describing historical (and hysterical) situations in school and at various employments. Once again, a group of Mount Carmel graduates met as strangers and became friends through the simple process of meeting for lunch. See you next year!

Cleveland, Ohio, was the setting for a small gathering to meet and talk with Dr. Wynd. Robbi Lezan Cwynar ’77, and her close friend Ann Regas Reitenbach ’77, along with Virginia “Ginny” Lynch Bache ’59, were all delighted to meet her, hear the news from Mount Carmel, and catch up on one another’s lives. 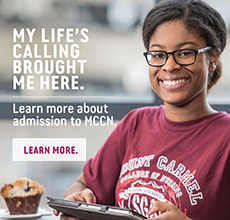