Here’s a quick round-up of what’s happening at MCCN-FMC. 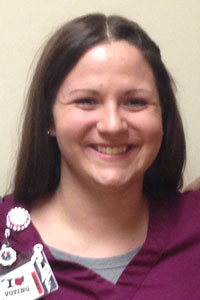 Given that she serves as SNAM-FMC president, as a student ambassador and as an active member of Student Advisory Council, it probably doesn’t surprise anyone to know that Rebekah Young is a highly engaged student at MCCN-FMC.

Rebekah presents herself in a positive, mature manner. She is organized, cheerful and committed to doing her best in all that she does. When caring for her patients, her clinical instructor says that she is supportive and communicates clearly. Importantly, she’s observant on the job -- she is able to recognize patient situations that would warrant action and is quick to report her findings to the nurse and or instructor. In regular interactions with patients, she is proactive with health promotion and patient teaching. She is a team player and is supportive of her peers, staff and faculty.

Thanks, Rebekah, for your outstanding performance!