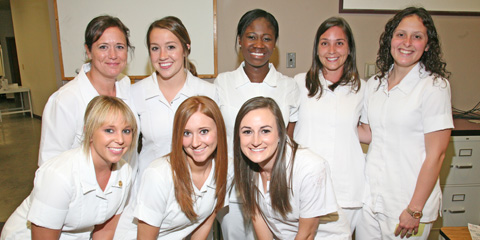 MCCN was pleased to honor and recognize graduates during the Pinning and Recognition Ceremony, held May 8 at Grove City Church of the Nazarene. The tradition of presenting pins to nursing graduates dates back to 1860, when Florence Nightingale wanted graduates of the first professional nursing program in London to stand out and be respected, so she designed a pin for graduates to wear on their uniforms. By 1916, awarding pins became a common practice for all nursing graduates in North America and the United Kingdom. Today each nursing institution awards their own uniquely designed pin, which is awarded by faculty to new graduates, symbolizing entry into the field of nursing.

The Lamp Award was presented to Katie Zarbaugh (MCCN Columbus campus) and Katie Kossler (MCCN-FMC). The Lamp Award is given to the student(s), voted by peers, whose behavior is most reflective of caring in the nursing profession as described in the philosophy of Mount Carmel College of Nursing.

The Humanitarian Award was awarded to Devon Furey (MCCN Columbus campus) and Tamara McCarroll (MCCN-FMC). This award is presented to the student(s) who has/have demonstrated outstanding participation and leadership in promoting community service and commitment to equity and diversity within the college community.

The Inspiration Award was presented to Falon Astrowski (MCCN Columbus campus) and Alexis Martin (MCCN-FMC). This award is given to the student(s) who has/have served as a consistent role model of motivation, positive influence, encouragement and who inspire(s) others to achieve at their highest potential.

The Clinical Excellence Award was presented to Jared Bader (MCCN Columbus campus) and Chelsea Tschappat and Kaitlyn Henry (MCCN-FMC). This award is given to the student(s), voted by the faculty, who demonstrate(s) the most consistent outstanding achievement of the clinical objectives throughout the program.