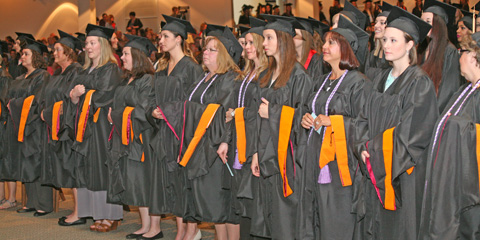 On Saturday, May 9, 253 graduates, their friends and families, plus MCCN faculty and staff celebrated Commencement at Grove City Church of the Nazarene. Faculty Marshal Tricia Whitney, MSN, RN, led the processional, which included 164 graduates receiving a Bachelor of Science in Nursing (BSN) degree, 42 graduates of the Online RN-BSN Program and 47 graduates receiving Master of Science (MS) degrees.

After the invocation by Ellen O’Shaughnessy, DMin, Director of Campus Ministry, and remarks by President Christine Wynd, PhD, RN, and Mount Carmel College of Nursing Board Chair Matt Mazza, attendees welcomed Melanie Dreher, PhD, RN, FAAN, chair of the board of trustees for Trinity Health, the parent organization of Mount Carmel Health System, as Commencement speaker.

In recognition of her contributions to nursing education, MCCN awarded Dreher with an honorary doctorate, the Doctor of Laws (LLD), which is awarded to an individual who has expertise in government or public service, or for preeminence in any field. Dreher currently serves in a number of healthcare governance roles, including the Chicago Board of Health, a director of Wellmark/Blue Cross Blue Shield and a trustee of Loyola University. She has had a distinguished career in research and academic leadership, producing several books, reports and published articles. Her four decades of leadership in nursing education include Deanships at the University of Miami, the University of Massachusetts at Amherst, the University of Iowa and most recently Rush University College of Nursing, where she is now Dean Emerita. After serving as President of Sigma Theta Tau International (STTI), the Honor Society of Nursing, Dreher was honored by STTI through the establishment of the Melanie Dreher Dean’s Award, given annually to a dean who has most embraced the values of Sigma Theta Tau. She also is a Fellow in the American Academy of Nursing and recently was named among the “40 Smartest People in Healthcare” in Becker’s Hospital Report.

Congratulations to all MCCN graduates as they embark on the next stage of their careers!