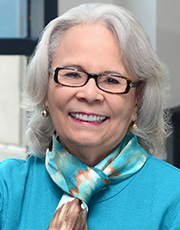 Our congratulations to Kathy Espy are both sincere and bittersweet, because in addition to wishing her well, we also bid farewell as she steps into her new role as director of Community Engagement for Mount Carmel Health System. A highly respected community leader and champion of diversity and inclusion, Kathy said yes when she asked her to work with health system leadership in fostering community engagement and relationship-building.

Kathy’s association with Mount Carmel began 26 years ago when she served as a member of the then new Board of Trustees for Mount Carmel College of Nursing (MCCN). Her advocacy to support minority students in their journey to become professional nurses led to a leadership position at MCCN as director of Diversity and Inclusion. Kathy developed our notable Learning Trails program that not only supports and encourages students, but also has contributed to the College’s growth and success. Kathy’s legacy at the College will endure as the Learning Trails program celebrates its 20th anniversary.

Over the years, Kathy’s positive impact on the lives of others has extended well beyond our campus. She is among a handful of women to receive the coveted YWCA Lifetime Achievement Award; and this month she is recognized with Columbus Business First’s Diversity in Business Award for Lifetime Achievement. The impressive list of her other recognitions and awards is lengthy.