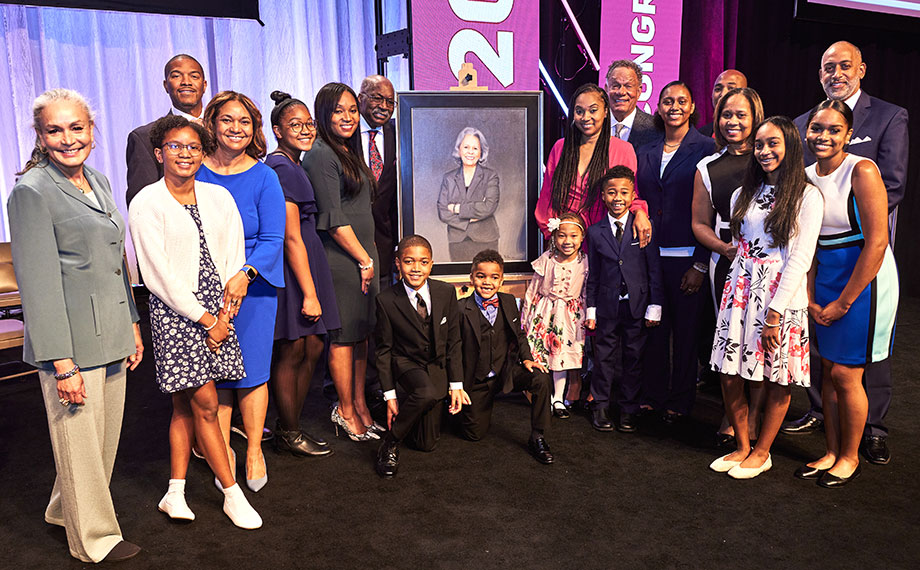 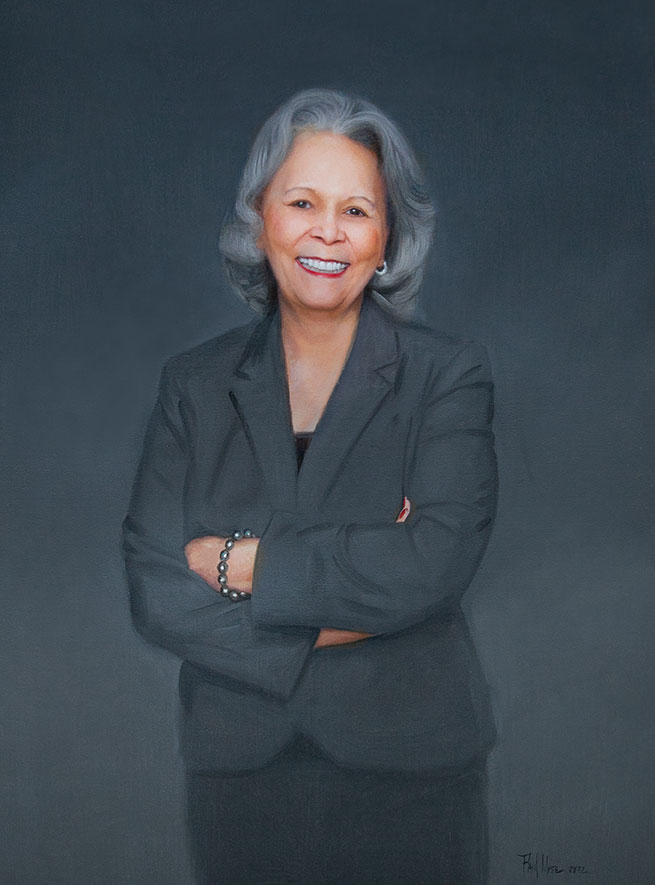 Celebrating a life well lived is both an acknowledgement of the amazing impact a person can make and an inspiration for those left behind.

Kathlynne “Kathy” Espy, a remarkable, accomplished champion of Mount Carmel College of Nursing (MCCN) passed away on January 13, 2002. She spent nearly 30 years of her professional life as a powerful advocate for diversity, inclusion, and student success at the College and at Mount Carmel Health System (MCHS).

She loved the students

Anyone associated with MCCN knew or at least knew of Kathy. “She loved the students,” said her daughter, Amy “She realized they were impacted by everything around them, all those circumstances that affect their ability to succeed. I hope they remember how much of herself she gave to them,” Amy added.

Her daughter, Amy is an occupational medicine physician and Chief Medical Officer for the Washington Metropolitan Area Transit Authority. Elizabeth “Beth” is one of four daughters raised and loved by Kathy Espy and her husband Ben. Beth is Director of Community Engagement at the Atlanta Police Department and a top-producing Realtor® in Atlanta. The youngest daughters, twins, are Laura, an emergency medicine physician/Associate Medical Director and Medical Director of Community Partnerships with Mid-Ohio Emergency Services/OhioHealth, and Lynnette (Lynne), a shareholder and Chief Diversity, Equity, and Inclusion Officer at Cozen O’Connor, an international law firm.

What better way to get to know Kathy Espy than through the eyes of the four women who knew her best and loved her most of all.

Lynne says, “Mom could enter circles anywhere. Professionally, she was most proud of her work on diversity and inclusion at the College.”

“I was in awe of her ability to ‘own’ a room, said Laura. “She loved connecting women to other women so they could learn and grow from each other.”

One beneficiary of Kathy’s ability to connect people was Ann Schiele, PHD, RN, MCCN President and Dean Emerita. She recruited Kathy, who was a member of the MCCN Board of Trustees, to the College to take a brand new role as director of Minority Affairs and Community Initiatives. “In 1990, I decided we needed a leader to attract the diverse community of learners that we were striving for in the student body,” said Dr. Schiele. “It was one of the best decisions I made as president of the College. In addition to establishing and championing diversity improvement, Kathy tucked me under her arm and introduced me to so many wonderful people. I will never forget her generosity and kindness. I truly believe she was very important for my personal growth and development, Schiele added.”

“Whether in a professional or personal capacity,” said Beth, “she had an amazing ability to ‘show up.’ She would be there for you. Every birth, every graduation, and every recital – she was there.”

Each daughter cherishes unique advice that Kathy provided and each uses her good work as inspiration for their own lives. “She taught us about integrity,” said Lynne. “That meant doing the right thing even when no one is watching, as well as believing in ourselves, and treating others as we would want to be treated.”

“She taught us to lift as we climb,” said Amy, “encouraging us to help, educate, and advocate for and with others.

Beth’s favorite advice from her mom goes back to always showing up. “We all have material things, but it’s important to celebrate and support others,” she said.

Devotion to family, education, and service

All four daughters attended Spelman College, a historically black liberal arts college in Atlanta, which Kathy and Ben cited as the best investment they ever made.

Ben Espy, Kathy’s husband of 54 years, a prominent lawyer and political leader, as served as a Columbus City Councilman and State Senator. They met at Ohio State, when she was a freshman and he was a sophomore football player. They married in Kathy’s hometown of Toledo and lived first in Washington, D.C., while Ben attended law school at Howard University, came back to Columbus, then resided in New York while Ben was stationed there serving in the U.S. Air Force. After that, they settled permanently in Columbus.

“She was so supportive of his political career,” said Beth. “He would tell you he couldn’t have done it without her.”

While supporting Ben’s political success and raising four daughters, Kathy’s boundless energy and commitment to service led her to leadership positions in multiple organizations. Her service on the MCCN Board of Trustees – as its first Black member – marked the beginning of an extraordinary career. “It was great to see mom come into her own and grow professionally,” said Amy.

A true contributor to student success

“Kathy was the perfect person for her role at Mount Carmel College of Nursing. Her compassion for advocacy, mentoring, understanding issues of poverty and homelessness, cultural competency, goal setting, project planning and implementation and fundraising were amazing. Her direct approach and obvious compassion put students at ease immediately. She never talked down to them, but honored their individuality and status as a future healthcare professional, while at the same time showing empathy with the extreme effort they put forth to shine academically and in clinical situations,” said Kim Campbell, PhD, MCCN director, Enrollment Management.

“Kathy brought a unique understanding of the challenges of diversity and inclusion that students faced. In turn, she worked often with faculty and staff to enlighten them on diversity matters and help resolve issues. She also was instrumental in developing successfully programs that influenced the community by enhancing minority recruitment, retention and support, which in turn provides professional nurses of diversity within the communities they serve. Some of these programs include the Men in Nursing group, Minority Student group, the annual Minority Student Dinner and a program that Kathy created and named, The Learning Trail, which was designed to support and mentor students of all minority groups,” added Dr. Campbell. 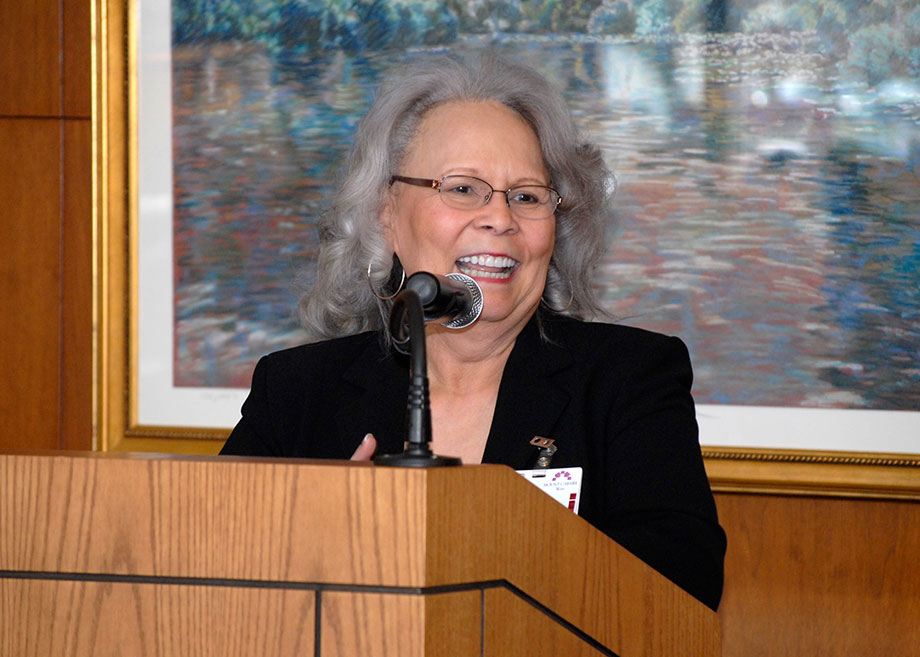 Kathy retired in 2020 from her position director of Community Engagement for Mount Carmel Health System. Even after her retirement, Kathy continued to serve on the Board of Directors for the Mount Carmel Foundation.

According to her daughters, Kathy loved to travel, read historical fiction, and dabble in genealogy, too. Her adventurous nature was on full display on her last trip – to a cattle ranch in Montana. “I’m trying to give the gift of travel and new experiences to my daughter as well,” said Beth.

One thing is certain, Kathy Espy is missed.

“I miss her voice and the assurance she gave that everything would be OK,” said Amy.

“I’ll miss her consistent love in everything we did,” added Laura.

Beth says she misses her energy and being able to pick up the phone to talk with her. And Lynne misses her laugh, fierce loyalty, and her uncanny ability to never see fault in her sons-in-law, loving them all as she did.

A privilege to honor her contributions

At the Spring Commencement, Kathy Espy was awarded an honorary Doctor of Humane Letter and the first Kathy Espy Humanitarian Awards were presented. The annual student and employee award winners are selected by their peers and are given to individuals who demonstrated outstanding participation and leadership in promoting community service and a commitment to equity and diversity within the College and the community.

The entire Mount Carmel community misses Kathy Espy and is eternally grateful for her faithful service and many accomplishments. Her four daughters are a testament to the amazing person she was and there is no doubt they will carry forward her legacy, as will MCCN.