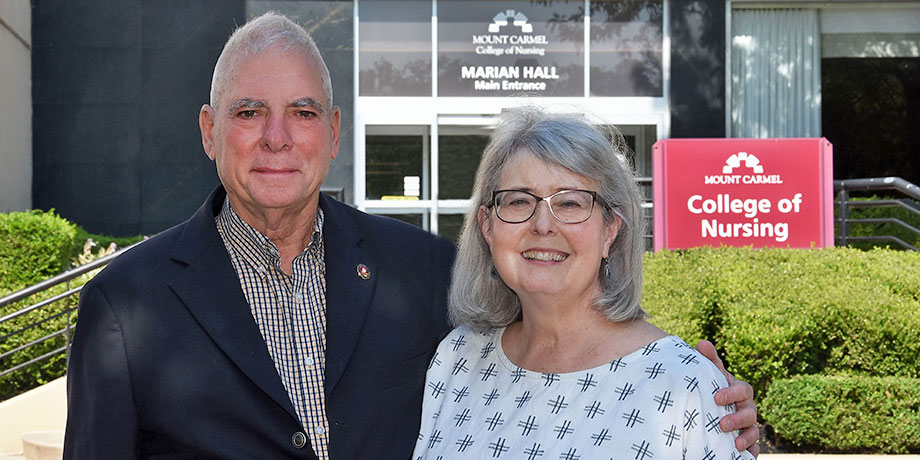 “Steve says we don’t just have strong ties to Mount Carmel, we have an anchor and a chain,” chuckles Monica Walter, BSN, RN, as she smiles at her husband of 44 years.

Not only were Monica and Steve Walter – as well as the 14 siblings they have between them – all born at Mount Carmel West, but their 42-year-old son was born there, as well.

Those are all significant anchors, but the one set deepest was in 1976 when Monica’s then 50-year-old father suffered a heart attack and was brought by squad to the Franklinton hospital.

“At the time, I was just out of nursing school and my husband of only 10 months stayed right at my side,” she recalls. “I was really impressed by how Dr. Murnane cared for my dad, who went on to live another 38 productive years. The experience of seeing first-hand what it meant to advocate for patients, including personally watching over my father, had a huge impact on my practice as a nurse.”

Just three years later, Monica came to work at Mount Carmel, where she always put patient advocacy first. She was on the forefront of same-day surgery, preadmission testing and surgery scheduling and when she retired after 30 years in 2009, she was surgery coordinator preparing patients for vascular bypass surgery.

Steve was always nearby, assigned to Franklinton as shift sergeant with the Columbus Police Department. A veteran of the Tet Offensive who served with the 632nd Security Police Squadron in the Mekong Delta, Vietnam, he also served 21 years as a reservist with the U.S. Marine Corps.

When they retired together, Monica volunteered for Dr. Ann Schiele (now president emeritus, MCCN), helping patients at Lower Lights with their prescriptions. Monica started reading students’ scholarship essays for Dr. Schiele and Steve soon joined her. Today, she volunteers in the ED and NICU at the new Mount Carmel Grove City hospital.

“Even though I never attended Mount Carmel – I went to Grant for my nursing diploma because, with six sisters, I was lured by a private room in the dorm – MCCN’s mission and vision as a Catholic institution of higher learning, means a lot to us,” Monica asserts. She earned her Bachelor of Science in Nursing (BSN) at Franklinton University before Mount Carmel School of Nursing transitioned into the College.

Still side-by-side, Steve and Monica recently chose to strengthen their ties – to honor their anchors – to Mount Carmel by establishing the Monica and Stephen Walter Scholarship Endowment Fund through a $100,000 Planned Gift. This generosity is in addition to the five $1,000 nursing scholarships they have already given annually since 2011 and will ensure that students with financial need will continue to receive the couple’s help for many years to come.

“We’ve always lived very frugal lives,” Steve notes. “We took simple vacations, live in a modest home and sometimes drove clunker cars, but it’s been a great life together and we want to give back where we know many future nurses will be positively impacted for a long time,” he adds.

Providing for Future and Present

Given the Walter’s extreme generosity, it was no surprise to Alyssa Fry, senior development officer for the College, when they both readily said, “We want to help,” when she described the need to establish a $25,000 Student Emergency Fund.

“When Alyssa explained how easily unexpected financial needs can derail a student’s plans, we understood,” Monica says. “In reading student essays, Steve and I have been amazed at the life experiences some students have overcome in answering their call to nursing and we want to be an ‘anchor in the storm’ for someone to make sure a temporary setback did not turn into a permanent loss for the nursing profession.”