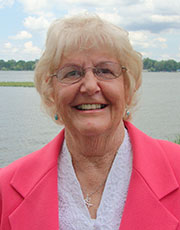 Other degrees/credentials: After working as a nurse in Columbus for two years and attending The Ohio State University, I was recruited into the Air Force where I served three years and attended Brooke AFB School of Aerospace Medical Flight Nurse Training. I married a pilot and soon became pregnant. Because at that time you could not serve if you were pregnant, I received an Honorable Discharge. Still loving nursing, I continued my education at every place we were stationed, and ten years, four children and 11 moves later, I earned a Bachelor of Science in Nursing from Arizona State University and later took graduate courses at Catholic University in Washington, D.C. I’m certified in both Nursing Home Administration and Infection Control. Most recently, the prestigious International Nurses Association welcomed me into their organization and I’m now included in the Worldwide Leaders in Healthcare publication.

Professional Highlights: I’ve worked in nearly every area of nursing over 55 years, but became pretty frustrated and turned to publishing. I now serve patients as an author and a nursing consultant in Ohio. My book, “Finding A Nursing Home, What You Find When You Get There,” was published under the pen name of V.K. Lynn. My latest book is entitled “Wake Up America! Our Healthcare is Being Usurped.”

What is your hometown and where do you currently live? I grew up in what is now German Village in Columbus. After all the travels, I am now living in Lakemore, Ohio, near Akron.

When did you first feel the call to be a nurse? I don’t know when I decided to become a nurse. My mother died when I was four years old and I was always told that I was the one that would be a nurse.

What television show do you have to DVR every week? I do not even know how to set up my DVR, but like some shows like NCIS.

What is your favorite memory of Mount Carmel? My memories from my days at Mount Carmel are many. I remember Sue Wolfe complaining about the child with the squeaky tricycle outside making so much noise when we were trying to study. Today the students might not understand our needing to have the windows open to get some air! And, I remember the fear when we had to scrub in with N. Competti, as our instructor – the training was strict, but, oh so valuable.

What book is currently on your nightstand (or at the top of your Kindle favorites)? When I have time, I read a lot of Infection Prevention journals and like Janet Evanovich for humor. I’m usually busy with my eight grandchildren or paddling with the breast cancer survivor Dragon Dream Team.

How has your Mount Carmel network helped you in your life, personally or professional or both? I attribute my success to my love of nursing, and having worked in so many different areas, learning something new each time. Mount Carmel encouraged my curiosity and gave me a great foundation for my career.

What advice would you like to share with other nurses as they move from student to alumni of Mount Carmel? Don’t give up on anything you value: Your desire to care for others, the values you are taught at Mount Carmel or your ability to make a difference for each and every patient. And, there are going to be days that are difficult, but that is when you will be needed the most.