Our own Stevo Roksandic Made National News! 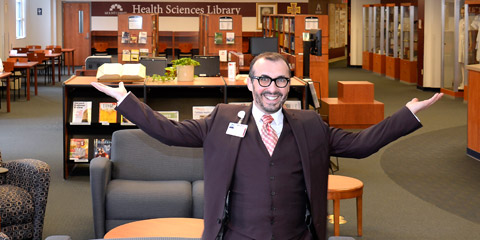 Stevo Roksandic, MBA, MLIS, AHIP, regional director of Mount Carmel Health System’s Library Services, has been named a “Mover and Shaker” in the library industry in the March 15 issue of “Library Journal,” a national publication. Stevo, who joined Mount Carmel in 2003, was selected for this honor, not only because of his commitment to the profession and his efforts that have expanded library services, but also because he is among those “Movers and Shakers” who are transforming libraries themselves in the 21st century.

Mount Carmel alumni are indebted to Stevo for his idea to display archive materials, which was the seed for creating the new exhibit in the Health Sciences Library that showcases a century’s worth of priceless keepsakes depicting how early Mount Carmel nurses studied and cared for their patients (see “A Visual Tribute,” Spring 2014 issue, “the Lamp”). His professionalism and creativity will be celebrated at a special luncheon in June during the American Library Association’s annual conference in San Francisco. Congratulations, Stevo!