By Encarnacion Pyle
The Columbus Dispatch

As its first and only president, Ann Schiele really is the face, the heart and the soul of the Mount Carmel College of Nursing.

But after 52 years with the Mount Carmel Health System, including 48 at the nursing school, Schiele will step down next summer to devote more time to her husband, children and grandchildren, work with the poor, and raise money for the school. 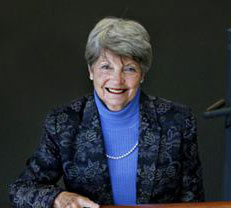 In her typical dynamic fashion, Schiele, 74, insists she isn’t retiring — just transitioning to another role supporting the Catholic school in Franklinton. With more than 1,200 students, it is the third-largest nursing college in Ohio.

“The college has given me everything: purpose of life, wonderful people and a great career. I’ve been blessed to be here so long, and I’m not about to leave it all,” she said with a chuckle.

That’s fine with many who say that although Mount Carmel can replace her, it can’t replace what she’s done for the school and the community.

“She’s the Michael Jordan of nursing education,” said Dr. Charles Saunders, vice president of medical education for the Mount Carmel Health System. “The best the college can hope is to find a LeBron James to fill her shoes, which isn’t bad, but it’s not Michael.”

A passionate basketball fan who played at Ohio State University as a walk-on, Schiele probably would be tickled by the comparison.

Schiele began her career at Mount Carmel West hospital in 1961 as a neurological nurse. Her mother was a nurse, and her parents owned and operated the only funeral home in Sherwood, a town about an hour west of Toledo.

With the railroad running through town, it wasn’t unusual for Schiele’s mother to feed homeless wanderers on the back porch or tend to nearby migrant workers when they fell ill. “She embodied the compassion and caring that has come to symbolize the profession,” Schiele said.

Faced with becoming a teacher, secretary or nurse — the typical careers open to women back then — Schiele didn’t hesitate to choose nursing. After earning a diploma at the St. Vincent School of Nursing in Toledo, she moved to Columbus to attend Ohio State. Over the years, Schiele has earned three degrees at OSU.

Four years after Schiele started at Mount Carmel West, a clinical instructor for the nursing school asked her to swap jobs. That’s when she discovered her passion for teaching.

Before long, Schiele was an administrator helping to transition the school — founded in 1903 by the Sisters of the Holy Cross — from a three-year diploma program to a fully accredited, four-year, degree-granting nursing college in 1990. Not surprisingly, she was chosen that year to lead the new college as its first dean and president. The first class had 36 students.

“She’s a forward-thinking force of nature who locks her sights on a goal and goes after it with dogged determination,” said Brian Tierney, executive vice president and chief financial officer of AEP. Tierney serves on the board of trustees of the Mount Carmel College of Nursing and is leading the search to replace Schiele.

In 2003, 100 years after opening its doors, the college took yet another bold step forward under Schiele’s tenure by introducing a master’s program that now has five tracks. Four years later, Mount Carmel added an accelerated 13-month bachelor of nursing degree for people who already have a college degree and want to change careers. That year, Mount Carmel also opened two apartment-style residence halls, more than tripling the number of students it could house.

In 2008, the college opened its Lancaster extension campus at Fairfield Medical Center to provide classroom and hands-on clinical space for more students, and it has since added several undergraduate and graduate online programs.

The demand to get into nursing programs across the state has increased as other professions have cut jobs, Schiele said. An aging workforce, a graying baby-boom population and millions more insured patients entering America’s health-care system under reforms will only fuel that growth, she said.

Experts project a shortage of at least 1 million registered nurses by 2020.

To ease the crowded emergency room at Mount Carmel West hospital and long waiting lists at local clinics, the college teamed with Lower Lights Christian Health Center in 2010 to open a center where nurse practitioners are the primary-care providers. The college also added a family nurse-practitioner program.

“Ann has a passion and drive to serve the underserved, those who are marginalized and often are forgotten,” said Sharon Cooley, a nurse and assistant professor at Mount Carmel.

Last year, Schiele also served on a team that established a $1.1 million, 11,000-square-foot clinical skills and simulation center in a medical office building next to Mount Carmel West. It uses robotic human simulators — which talk, have a pulse and bleed — to train nurses, doctors and others.

An energetic woman who almost always is smiling, Schiele frequently arrives at work before 7 a.m. and isn’t shy about pulling in people to help her accomplish her goals. “If Ann puts her arm around you, you’d better get ready to go to work or start running,” said Kathy Espy, the college’s director of diversity and community initiatives.

To honor her work, Mount Carmel is establishing an endowment fund in her name to provide student scholarships. The college hopes to raise $500,000 and will celebrate Schiele at the Mount Carmel Foundation’s annual Champagne and Diamonds gala in April.

“You can go through an entire life and only meet a few great men and women,” said Kip Sexton, the college’s program admissions adviser. “Ann Schiele is one of those people.”