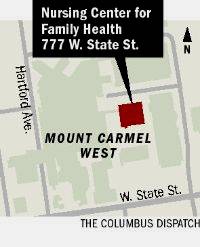 The crowded emergency room at Mount Carmel West hospital and long waiting lists at local clinics suggest that Franklinton is a neighborhood in need of primary health-care providers.

So there's little doubt that a new family nursing center on the hospital's campus will meet its goal of 20 patients a day. The center is a joint effort of the Lower Lights Christian Health Center and the Mount Carmel College of Nursing. Nurse practitioners are the primary-care providers.

"The idea was motivated by a consistent need for access that just seems to be increasing for the uninsured and government-insured," said Dr. Dana Vallangeon, the chief executive of Lower Lights who oversees the nurse practitioners.

She said there's a two- to four-week waiting list for new patients at Lower Lights, and she hopes the nursing center will help reduce that to a few days.

Ann E. Schiele, president of the Mount Carmel nursing college, approached Vallangeon with the idea of a clinic that would address some of the health-care needs in the area and serve as a training site for students.

The college will start a family nurse-practitioner program in January with 24 students.

"It all fits together," Schiele said.

Nurse practitioners do many of the same things as family doctors and work in collaboration with physicians. The nursing-center concept is expected to spread in the next few years as federal health-care reform insures an additional 32million Americans.

"My outlook on this is that we're going to need all qualified hands on deck," said Jeffrey Biehl, executive director of Access HealthColumbus, a public-private partnership that seeks health-policy solutions.

"It's not about minimizing the role of physicians; it's about expanding the capacity of primary services, and a recognition that we have an imbalance of supply and demand."

The center received a $25,000 grant from Cardinal Health for equipment. Officials have applied for two more grants.

"Even if we don't get the grant funding, we're able to finance this," Schiele said. The center accepts private and government insurance and offers a sliding-fee scale for the uninsured.

The space for the center, in an office building across from the emergency department, was provided by the hospital. It has six exam rooms, a laboratory, a student workroom and a health library for patients and the public.

"We want to make materials available if they want to research a medical topic," said Catherine Johnson, an associate professor at the college and a nurse practitioner at the center.

A conference room will be used for classes to teach patients and the public about such topics as diabetes and wellness.

The center is open on Wednesday mornings. By January, it is to operate four days a week.

Vallangeon sees some of her patients at the center and takes with her new patients waiting to get into Lower Lights. Eventually, the hospital will refer to the center the patients who go to the emergency room for such minor health complaints as sore throats and urinary infections.

Diana Kaderly, who is unemployed and uninsured, recently called Lower Lights for an appointment. She is menopausal, is seeking hormones and wants to get her blood pressure under control.

The West Side resident said the Lower Lights receptionist asked if she would consider going to the nursing center instead.

"This is great; everybody's nice," Kaderly said during an appointment last week with Johnson. "I actually feel better about coming here than my own personal doctor when I had insurance. They seem more relaxed here and not in a rush to see the next guy."