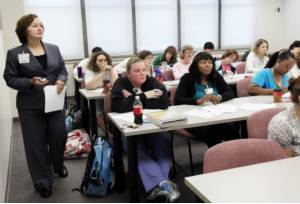 The sluggish economy hasn’t slowed the health-care industry from hiring, and that’s spurred new nursing schools to pop up across Ohio.

Since 2003, there’s been a 54 percent increase in the number of nursing programs across the state. Currently, there are 168 programs.

Many of the new programs are at private for-profit schools that offer associate degrees. These schools don’t have the waiting lists many community colleges have had to create because of demand.

But many of these schools lack the accreditation that graduates need to get a bachelor’s degree at local colleges and universities.

The National League for Nursing Accrediting Commission is considered the gold standard in judging diploma and associate-degree nursing programs.

Ann E. Schiele, president of the Mount Carmel College of Nursing, said 99 percent of the nurses accepted into their bachelor’s program come from accredited schools. Without this accreditation, “ we probably wouldn’t consider them at all,” she said.

There’s a national effort to push nurses with associate degrees back to college.

Last year, the Institute of Medicine, the health arm of the National Academy of Sciences, recommended that 80 percent of nurses have bachelor’s degrees by 2020.

Patti Reid, director of continuing education at Ohio State University, said nurses from unaccredited programs are shocked that they can’t transfer there.

“They say, ‘We were told we could transfer,’ and I say, ‘I’m sorry what you were told, but you’r e not accredited,’ ” Reid said. “I feel sorry for these students.”

Tri-Rivers Career Center in Marion gives diplomas to about 27 nursing graduates a year.

Emeline Kelly, nursing education programs manager for the school, said the center knows there are some universities and colleges that don’t accept their graduates.

She said the school wants to get the National League for Nursing accreditation and is exploring that process.

The Ohio Board of Nursing approves all of the nursing programs to make sure they meet administrative rules and curriculum and faculty requirements, and have a plan to prepare nurses.

John Ware, executive director of the State Board of Career Colleges and Schools, which oversees for-profit programs and colleges in Ohio, said: “It can be unfortunate for the students who get caught up in the battles of accreditation.”

Amanda Fojtik, 26, graduated from Ohio State but decided a few years ago to go to nursing school.

She enrolled at Galen College of Nursing in Cincinnati and is in her last year. She wants to earn a bachelor’s of nursing degree from Ohio State, but Galen isn’t accredited.

The college is working on accreditation, but that’s still a few years off, said Stephanie French, Galen spokeswoman.

“It would be nice and a smoother transition to go to Ohio State, but I did make sure there are other schools that take my credits,” said Fojtik, a Cincinnati resident.

“For the most part, the associate’s degree nurses are well prepared to come into our program,” said Ann Peden, department chairwoman for nursing at Capital.

Most hospitals are looking for nurses who pass the state board exam and are licensed.

“But we have relationships with certain schools and have built confidence in the type of new grads they produce,” said Karen Robeano, chief nursing officer at Riverside Methodist Hospital.

Students can see whether their courses will transfer to other colleges or universities by going to www.transfer.org. shoholik@dispatch.com