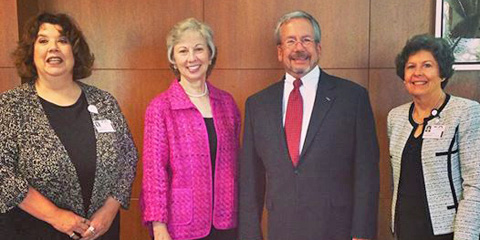 Ohio State Supreme Court Justice William O’Neill joined Mount Carmel College of Nursing on September 9 for an exciting lunch and learn to celebrate Constitution Day. Students, faculty and staff joined the Men of Mount Carmel College of Nursing and the Multicultural Education Committee for this special conversation to commemorate the formation and signing of the U.S. Constitution on September 17, 1787.

Justice O’Neill has an extensive background as a lawyer, a judge, a justice, an Army colonel, as well as a Registered Nurse. An Ohio native and graduate of Ohio University, he was elected to the Ohio Supreme Court in 2012 and is currently serving his term, which started in January 2013. O’Neill also graduated from the Huron School of Nursing and is a registered nurse in the pediatric emergency department at Hillcrest Hospital in Mayfield Heights, Ohio.