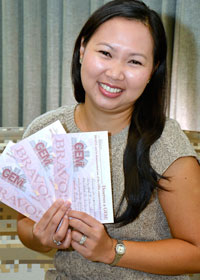 Alvie Gaiser, a senior at Mount Carmel College of Nursing, is celebrating an exciting accomplishment this month; in fact, she’s celebrating three. Gaiser was the lucky recipient of three GEM notes this semester: one from a patient and two from patients’ family members.

A GEM note is meant to recognize health professionals within Mount Carmel Health System for “Going the Extra Mile.” GEM notes can be filled out by colleagues, patients, families of patients or friends of patients. GEM notes also can be easily filled out online or delivered by hand upon request. It is a high honor for a student to receive a GEM note from a patient, let alone multiple GEM notes in the same semester, according to Kerry Fankhauser, MSN, RN, one of Gaiser’s instructors. All three of the awards included personal notes that described Gaiser as “a ray of sunshine…already spectacular” and as a nurse with a “great personality.”

Gaiser’s story is a unique one. Originally from the southern region of the Philippines, Gaiser did not initially start in the healthcare field.

“My dad did not want me to go into nursing in the Philippines. It is a very populated profession there and does not pay very well,” she said.

Gaiser instead decided to pursue a career as an ESL (English as a Second Language) teacher in Indonesia. After two years, Gaiser decided to relocate to the United States with her now-husband to pursue a degree in nursing. After finishing her general education courses at Columbus State, Gaiser transferred to MCCN, where she is set to graduate in May 2015.

“I am so proud of the care that she gives to her patients/family and the respect she has earned from her clinical rotation staff at Mount Carmel St. Ann’s Inpatient Unit. She embodies one of our core values of compassion in her nursing practice,” added Fankhauser.

“The GEM notes are validation that I am where I want to be, doing what I want to be doing and show that I am doing a good job,” said Gaiser. “They are icing on the cake for me.”