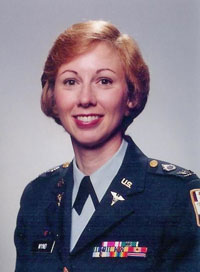 Did you know that MCCN’s President and Dean, Christine Wynd, PhD, RN, is also a veteran? She is! As you may know, Dr. Wynd is a history buff, so it’s not surprising that, as a young girl, she enjoyed reading about nurses who served on the battlefields – from Florence Nightingale in the Crimean Wars to military nurses in World War II and Korea. “From an early age, I wanted to wear a helmet and care for patients in tents,” she recalls.

Although Dr. Wynd’s 29-year military career does not include serving in a combat situation, she did get her wish to wear a helmet and work in a tent. Her final role before retiring from the U.S. Army Reserve Nurse Corps in 2001 was as chief nurse for two separate Combat Support Hospitals.

“We were constantly training for mass casualty and combat situations – setting up our own tent field hospitals, complete with air conditioning and equipment. In addition to learning how to triage and care for battlefield wounds, we also trained to defend the hospital,” Dr. Wynd recalls.

Once Operation Desert Storm was underway in 1990, training became even more serious. Dr. Wynd, who by that time had already achieved her PhD (from Case Western Reserve University), held the rank of colonel and was a professor at the University of Akron, was not deployed to Iraq, many nurses from her unit – the 320-bed 256th Combat Support Hospital – were.

“I’m very proud of the sacrifices and service of the men and women who served under my command. They were well prepared for the immeasurably important work they were called upon to do,” she says. “I’m also very proud of the long military tradition here at Mount Carmel College of Nursing – from the Sisters of the Holy Cross who answered President Lincoln’s call to care for soldiers aboard the Civil War-era hospital ship, Red Rover – to our alumni who served as enlisted persons and officers – to our present-day students who are part of ROTC – I wish them all Happy Veterans Day! And, yes, I’m also proud to be a veteran – having served my country is a big part of who I am,” she adds.