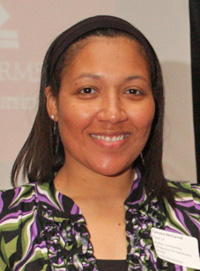 Tamara McCarroll is known at MCCN-FMC for her persistent smile on her face and positive attitude. She also is fully engaged in her studies, clinical work and is a serious learner, but what sets McCarroll apart is her passion for volunteerism.

Coming from a background where resources were scarce, McCarroll has a deep appreciation for people who helped her family during challenging times. In instilled in her a willingness to give back.

“Because we didn't have a lot financially growing up, so many people stepped in our lives at different times and helped us, and because of that, how can I not want to pay it forward?” McCarroll said.

“During my volunteer time I don't do much other than hand out supplies, collect supplies, make calls or clean when needed. I do what they need of me. I give my time depending on my class schedule that specific semester. Some places don't utilize volunteers on the weekends or they want men for the driving positions for the blankets for the homeless. I want my children to see me volunteer at least once every other week if I can't do more due to my class schedule,” McCarroll said.

After she graduates, McCarroll is interested in doing overseas missionary work, such as building schools and houses, based on the efforts of a couple at her church who do such work in Brazil. She also wants to incorporate more volunteer efforts into her daily efforts here at home.

“Once I'm done with school I really want to get more serious about volunteering with the domestic violence shelter. This has always been very close to my heart. I also plan to volunteer on Indian reservations to give honor to my grandmother's heritage. I have so many plans and just thinking about all of the different places I'll be able to volunteer once I graduate excites me,” she said.