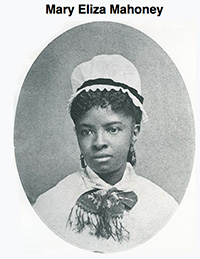 Mahoney (1845—1926), who lived her entire life in Boston, worked at the New England Hospital for Women and Children for 15 years before she was accepted into it that institutions’ nursing school. She was 33 years old at the time of her admission in 1878, when training consisted of spending one year in various wards to gain universal knowledge, attending lectures giving by doctors on the wards, and reading. She spent several months as a private-duty nurse and graduated in 1879 as the first African American registered nurse.

The eldest daughter of freed slaves, Mahoney knew from an early age that nursing was her calling. Fortunately, her parents moved from North Carolina to Boston before the Civil War, and she and her siblings attended one of the first integrated schools in Boston.

She gained an excellent reputation as a private care nurse, primarily for Boston’s wealthy families – her professionalism raised the status and standards of all nurses, especially of minorities. In 1896, she became one of the original members of the predominately white Nurses Associated Alumnae of the United States and Canada (NAAUSC), which later became the ANA. By the early 1900s, the NAAUSC no longer welcomed African American nurses; in response, Mahoney co-founded the National Association of Colored Graduate Nurses, which merged with ANA in 1951. Today, the Mary Mahoney Award is bestowed biennially by the ANA in recognition of significant contributions in advancing equal opportunities in nursing for members of minority groups (ANA Nursing World, 1982).

COMING SOON: Mount Carmel School of Nursing first admitted African American students in 1949. See the Spring/Summer 2017 issue, the Lamp, for a profile of alumna and donor, Regina Sallee Williams, ‘52, PhD, MSN, RN, FAAN, who was head of the Department of Nursing at Eastern Michigan University before her retirement.